What’s Up with the Red Cup? 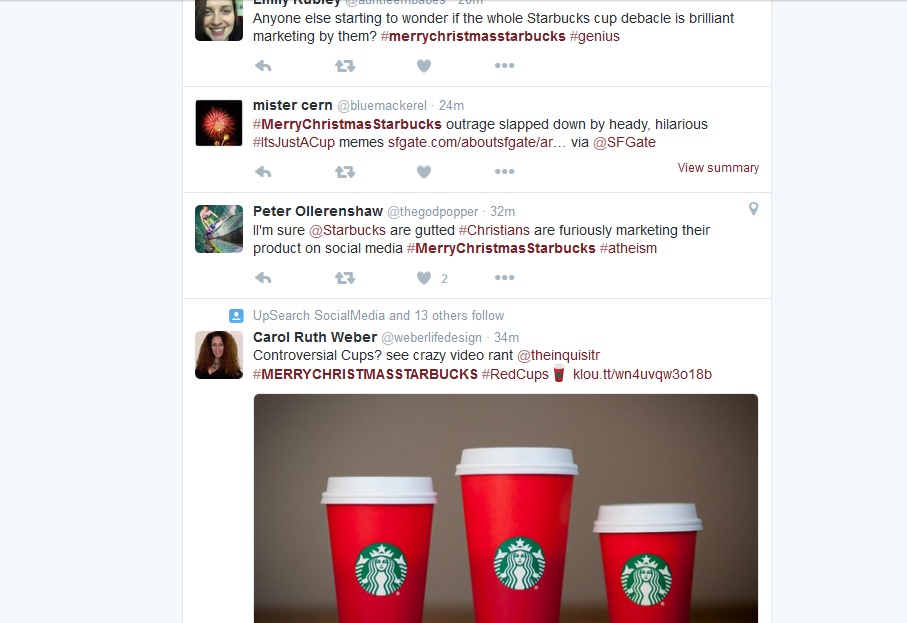 Josh Feuerstein, a self-described “social media personality,” sparked a lot of headlines with a YouTube rant claiming that “Starbucks REMOVED CHRISTMAS from their cups because they hate Jesus” and that “Starbucks wanted to take Christ, and Christmas, off of their brand-new cups.”

A quick reminder of the facts. For years now, Starbucks has been introducing a red cup in the weeks before Christmas, just a little bit later than the pumpkin spice lattes. The red cups have a new design each year. Sometimes there are white snowflakes, a snowman, or a sled. Last year there was a red-on-red pattern of bows. At no time has there been any religious symbolism of any kind, though there have been a couple of designs with Christmas tree ornaments, one showing words like “wish” and “hope.”

So there is no possibility that Starbucks is removing Christ from its coffee cups, because Christ was never on its coffee cups. The new design, which features a gradient from poppy to cranberry, is generally perceived by customers as plain red. Jeffrey Fields, Starbucks Vice President of Design & Content, made a statement about the cups, saying, “In the past, we have told stories with our holiday cups designs. This year we wanted to usher in the holidays with a purity of design that welcomes all of our stories.”

Feuerstein interpreted those views as support for his position, and there were some tweets favoring him, but no Christian organization is supporting Feuerstein’s “movement,” and there is no groundswell of outrage visible even on Feuerstein’s Facebook page. CNN surveyed Christians and found that 61% “don’t care” about the cup; 26% like it and 11% dislike it.

The grass roots responses tended to express anger over the spotlight on cup design, instead of on giving or sharing… when they weren’t simply making fun of Feuerstein.

Feuerstein’s understanding of reality in both cases — the meaning of the cups and the meaning of his video’s going viral — is far from the reality most of us see. He’s showing anger and a desire for attention that might affect the way he leads his life. He says that he has suffered from depression for years, and offers a video for sale described as “60 minutes of real, raw and relevant discussion about life, hurts, depression, hope, faith and so much more!!!”

Joshua Feuerstein’s personal mental health concerns may be part of the equation, or he may, as CNN’s commentator says, be engaged in “cynical self-promotion.” But there are some lessons here for all of us. Consider the introduction to the CNN clip on YouTube:

A crazy person was invited onto CNN on November 9 for some reason, to discuss Starbucks’ red cups. Apparently he was greatly offended by their lack of Jesus, presumably because as we all know, Jesus would have totally been a Starbucks kinda guy.

We should give it up.

Feuerstein’s anger over a design choice that was probably based on the popularity of adult coloring books or the trendiness of the idea of stories in this year’s marketing circles is certainly an over-reaction. His anger is based on something other than Starbucks cups. The reactions of others to the video have in many cases also been overreactions. Emotions being stirred up in the controversy may include a sense of persecution in “the War on Christmas,” bitterness among Christians over the trivializing of their religion, and ongoing frustration over inclusion and exclusion in American public life. It might make Feuerstein famous, it might increase sales at Starbucks, or it might bring about some serious discussions of the issues behind the anger.

But we hope it will also make us think a little more about jumping to conclusions about someone’s mental state based on a few minutes of talk. We hope it might make us think more about public shaming of people who exhibit unusual behavior. And we hope that this is the year when we quit saying “crazy.”