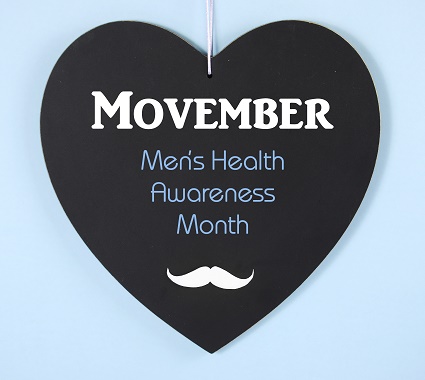 It’s the last day of Movember — Men’s Health Awareness Month — and you might be looking forward to shaving tomorrow, or to having your guy pick up his razor. You might, on the other hand, have discovered that a ‘stache is just the right look for you.

Don’t forget about mental health. The Movember website reminds us that men face mental health concerns even though our culture tells men to keep quiet about their feelings. The organization lists resources and also offers a self check survey that can help you recognize that you are suffering from depression.

And yet men are much less likely to reach out for help than women, according to the American Psychological Association. One reason is that depression, for men, may not take the form of sadness. Men may experience anger, irritation, or insomnia, and they may also turn to drugs and alcohol to self-medicate their depression, making it harder to diagnose.

Men are also more likely to use overwork or risky behaviors as coping strategies, and less likely to talk about their feelings with other people.

All these difference between men and women may be caused at least in part by the idealization of the strong, silent man, and the idea that expressing emotions is not only unmanly, but also a sign of weakness.

Traditional talk therapy may also feel uncomfortable for many men. The idea of sitting around and talking about feelings may be stressful enough to make a guy think twice about reaching out for the help he needs.

But it’s important to remember that more than 80% of cases of depression respond to treatment. Men who are depressed or facing other mental health issues do not have to live with them.

Before you shave tomorrow, think about whether you or a man you know might need some help. If so, contact us. We can help.