Outside the Box? What Box? 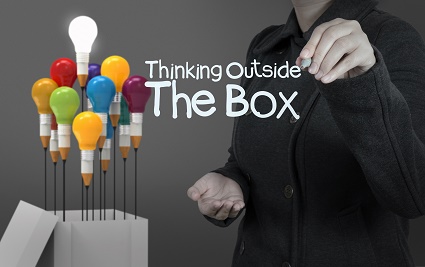 In 1954, Roger Bannister first ran a mile in four minutes — about 15 miles an hour. Before that time, no one had ever run that fast. Now, it’s considered a standard for male distance runners.

This is what happens when people think outside the box. The box is the set of expectations that limits people’s ideas about what is possible. Henry Ford famously said that if he had asked people what they wanted before he built the Model T, they’d have asked for a faster horse. If transportation = horse in your mind, questions about transportation will all be about horses. If it’s impossible to run a mile in four minutes, you won’t figure out how to run that mile in four minutes.

Sometimes the box that limits our ideas is a box created by what we know — like, the four minute mile is impossible or the way we travel in the city is by horse-drawn carriage.Sometimes it’s the way a problem is framed, or cultural expectations, or a company culture.

But sometimes it’s a box we make for ourselves.

Sometimes we create that box for ourselves by setting our own expectations about what we can do. Or by accepting things we’ve been told and replaying those mental tapes in our minds. Or by making ourselves a safe space that keeps us from being criticized by keeping us from doing anything bold.

Sometimes all it takes to think outside the box is a decision to look at our circumstances honestly, without boxing ourselves in. Sometimes that’s easier said than done. Sometimes it takes a trained, objective listener to help us see that there really isn’t any box. Contact us today and let us help.