Is a Positive Attitude Enough? 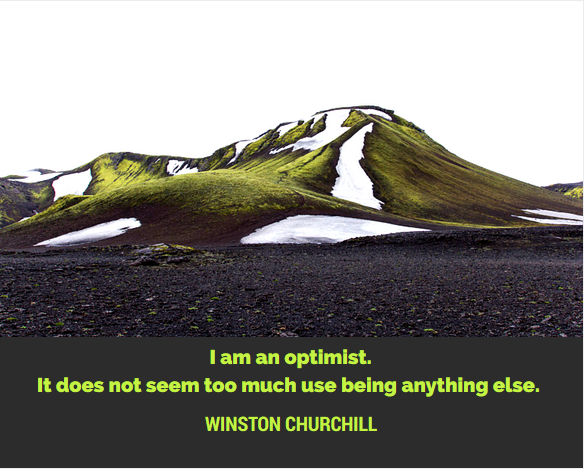 Winston Churchill, Prime Minister of England during the war years of the 20th century, is known for his encouraging statements:

You might think, looking at these and Churchill’s many more memorable cheery epithets, that Winston Churchill was one of those born optimists, the kind of person who made people around him feel irritable just by his sunny disposition.

Nothing is further from the truth. Churchill suffered from severe depression, and some modern observers think he might have had bipolar disorder. He had months of low energy when he had trouble getting out of bed, and other times of great energy, when he stayed up and worked most of the night. He abused alcohol and had difficulty communicating well with people.

He named the depression “my black dog,” and wrote about it to his friends and his wife, even though it wasn’t acceptable in those days for a public person — let alone the Prime Minister — to admit to mental health issues. But it is certainly the case that Churchill struggled with depression, probably throughout his life. “For two or three years the light faded from the picture,” he wrote to his doctor at one point. “I did my work. I sat in the House of Commons, but black depression settled on me.”

Churchill was a great leader, a prolific writer, and a deep thinker. He wrote 43 books during his lifetime and gave many memorable speeches. He also lived through two world wars in positions of power in a nation which was being bombed. His encouraging words were never intended to say, just be optimistic, just keep a positive attitude, and everything will be fine.

“Don’t worry; be happy” — this was not Churchill’s mantra.

Instead, he was telling his fellow Britons to be brave even though things were not fine. He was encouraging others, and probably himself as well, not to give in and not to give up. He was an optimist, as he said, because being a pessimist didn’t seem to work very well.

A positive attitude may not prevent problems or chase away troubles, but it may be worth working toward.