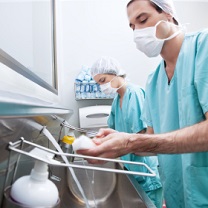 Miles and Lenore both hold the same challenging job at the same organization. Miles wakes up in the morning with exciting ideas about what he’ll do to improve his work that day. He feels confident about his work and satisfied at the end of a long, hard day. He enjoys talking with his friends about the events of the day and his plans for the future. Sometimes the demands of the job are stressful, but he makes sure to include regular exercise in his day and schedules time with friends to unwind. He wouldn’t change jobs for anything.

Lenore wakes up in the morning dreading going to work — that’s often her first conscious thought of the day. She heads to work feeling tired and anxious and spends the day feeling as though she’s about to get in trouble. No wonder, she thinks, because she can recognize that she makes more mistakes, cares less about the job, and feels tired much of the time. She thinks her job is too stressful and demanding, and she leaves at the end of the day feeling unsatisfied with the work she has done. On the way home, she fantasizes about quitting her job, or about things that might happen in her life that would rescue her from the work that now seems like a hamster wheel… sometimes she even imagines getting sick or for some other reason losing her job. Sometimes she feels tears welling up in staff meetings. She needs the job, but she’s not sure she can keep up any more.

Lenore is suffering from burnout.

We often use the word casually, but it has a specific meaning: extended stress leading to a feeling of exhaustion that affects work performance. It’s more than just having a tough day or needing a break. People suffering from burnout may feel tired all the time, experience dissatisfaction not only with work but with their lives in general, and have symptoms of depression. Some people experiencing burnout may find themselves drinking more or using other unhealthy coping strategies to handle ongoing stress, and some may even think about suicide.

What makes ER doctors experience their work stress differently? The researchers concluded that it was the combination of low control and high demand that made the emergency room so much tougher.

ER physicians tend to work for someone else, so they don’t own or control their own practices. The nature of the work means that it’s hard to predict demand or to schedule breaks.

Another study of physicians found that hospitalists, the doctors who work in hospitals but not in the emergency room, showed a lot of the same patterns as ER physicians. A Mayo Clinic study found that 43.8% were emotionally exhausted and nearly 10% reported some suicidal thoughts in the previous year.

Like ER physicians, hospitalists don’t work for themselves, they don’t set their own hours or systems, and they must respond to the work demands rather than planning their days.

Beyond these two specialties, doctors who experience burnout may talk about government regulations, the pressure of patient satisfaction surveys which are based on things other than medical care, or the burden of paperwork. These are all factors which can make the job more demanding and less under the individual physician’s control.

A Swedish study of physicians found that those who were in high demand/low control jobs were three times as likely to have poor physical health, too.

It’s not just doctors who face burnout. Waiters, for example, may have demanding jobs where it’s hard to finish work in the amount of time available. At the same time, they have little control over things like the quality of the food, the speed with which it’s ready to serve, and other factors that cause people to complain or to tip less. The high demand/ low control dynamic shows up across industries as a determining factor for burnout.

So how can Miles and Lenore, in the same job, have different experiences? Part of the difference could be individual: some people have better coping skills and better ways to respond to high-stress jobs. It could be the organization where they work, too. For example, doctors in a hospital which pushed for 95% patient satisfaction had higher rates of burnout among physicians, who didn’t feel that they had control over the “hospitality” part of the job which so highly influences patient satisfaction. Lenore and Miles may be in the same organization, but in different departments or divisions which approach things differently.

Organizations and even entire industries can work to give greater control or to lessen demands, and individuals can develop new ways of working. But the costs of burnout to organizations mean that it makes sense for organizations to work with individuals to improve working situations in high demand/ low control jobs. Treating the problem of burnout as though it’s all up to the individual doesn’t make sense.

Nonetheless, until organizations begin to consider burnout and make changes, individuals must take control of their own workplace wellbeing. If you feel that you’re in danger of burnout, contact us.